With the world turning to more greener solutions for all our power woes, Solar energy is the most feasible and one which is been used successfully world over.

This solar generator kit should become an essential part of your camping gear when you are out of the grid or have its own place in your emergency tools kit for all the unforeseen happenings of today’s world – be it a natural disaster or man-made. Let us see why this solar generator portable as it is can be of such significance. 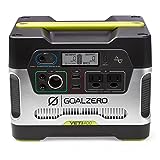 The not so good things with the Goal Zero Yeti 400

The market for solar powered generators, especially portable ones is still small and there are very few players in the market. As a result the competition is tough and the similarities many; yet the Goal Zero Yeti 400 scores over its nearest rivals in a few major and key issues.

Thus we see that when buying a solar generator kit you should pay heed to the price, its utility value for your specific need and the overall use of the product.

Since most of the solar powered generators are expensive, do not forget to look out for solar generators for sale where you can get good deals. The Goal Zero Yeti 400 is at a very affordable price in comparison with the rest of the portable generators.

The Goal Zero Yeti 400 solar generator kit is best suited for those who like to be prepared. Those who want to be ready for the power outages and any other electrical supply failure can depend on this robust compact generator which is completely safe to be used indoors because of the lack of toxic fumes and noise associated with a standard diesel generator.

In addition to that the Yeti can be conveniently charged even at the wall outlet.

If you are the kind who loves the outdoors and camping is a way of life, the Yeti comes handy there too. It is portable, fairly lightweight and can be carried like a small briefcase thanks to a thoughtful handle.

The built in LCD helps you keep track of the power input and output and also gives an indication of the battery charge.

This remarkable pure-sine wave inverter ensures that it is compatible with all AC electric devices like your laptop, Smartphone, MP3 player, DSLR and other gadgets which use less than 400 watts.

The next time you are out camping, make sure you have the Goal Zero Yeti 400 with you because it belies its size and is immensely capable of powering all your vital instruments. The Yeti is a simple and silent generator of power when you need it the most be it on your outdoor expeditions or indoors.

The makers have shown a lot of social responsibility by building a unit which is environment friendly and does not pollute with noise and harmful smoke; it just quietly charges under the sun waiting to be service when required.